The Happy Face of Hell

Few Americans consider the topic of Hell seriously very often. No one wants to think about their loved ones … or themselves … ending up in such a place!  But that doesn’t imply they never think of Hell at all. Actually, references to Hell are everywhere in our society.  But most of the time it is not the horrifying Hell of speculative theology. It is the fundamentally harmless, humorous Hell of comic strips, cartoons, and Halloween.

This Hell is not the fiery underworld of everlasting, excruciating torture for the unbeliever that has been vividly described over the ages by “fire and brimstone” preachers. It is a cartoonic “theme park” inhabited by an often clown-like Devil and his legions of merry demons.

Newspaper cartoons often depict this humorous Hell. Gary Larson’s Far Side cartoons sometimes featured a somewhat bland, boring, non-threatening, rotund Devil. One strip showed the Apostle Peter in the upper panel, greeting new “angels” (the souls of dead people) arriving at the Pearly Gates: “Welcome to Heaven. Here is your harp.” In the lower panel was Larson’s bland Devil at the “Gates of Hell,” with the alternate greeting: “Welcome to Hell. Here is your accordion.” 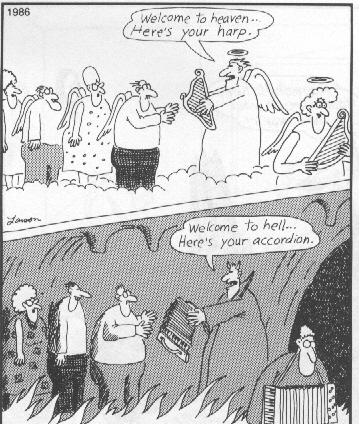 Cartoonist Scott Adams has featured in his Dilbert cartoon strip not “Lucifer, Prince of Darkness, ruler of Hell,” but “Phil, The Prince of Insufficient Light, Ruler of Heck.” Phil doesn’t have a trident like Lucifer—he carries a shovel-sized spoon.  And he doesn’t dispense horrific punishments of physical pain and suffering. He specializes in mild punishments for mild sins, such as condemning Dilbert to eat lunch with the company accountants for some minor infraction.

Even those who do believe in a much more horrific Hell have a hard time avoiding chuckling at such cartoons.

Perhaps his creator found inspiration in Victorian representations of the sidekick of some “cherubs.”

Then there are the devilish logos that are often adopted by sports teams. Although they may project either a cheerfully impish, or fiendishly ominous, image, no one takes seriously the implication of the word “devil” in this context as being a biblical reference. This devil is no more “real” than Superman or Spiderman. He is just a mythical figure used to imply power.

And even the marketing world contributes to the cartoonic face of Hell and the Devil. If a product has some connection to fire or heat, the Devil is a logical choice for a spokesman.

The cartoonic face of Hell has had a stronger influence for a long time on the mind of the average person than does what the Bible has to say about Hell.

The humorous happy face of the pseudo-Devil, ruler of the pseudo-Hell of comic strips and Halloween is even attractive to many people who consider themselves Christians. When Halloween rolls around they may choose to dress themselves, their children, and even their pets up in devilish costumes.

You might think this is just a 20th or 21st Century phenomenon, a reflection of our increasingly secular society. But that would be incorrect. For instance, the Victorian Era both in the US and Europe was a hot-bed of hellish humor, most evident in greeting cards and postcards.

In modern times we tend to connect devilish figures with Halloween. But the devil or devil-like characters used to be much more common icons for other holidays as well–including, surprisingly, the Christmas season.

In Germanic countries in the 1800s, the standard mythical “St. Nicholas” character who allegedly brought gifts to good boys and girls at Christmas time had an unusual sidekick. 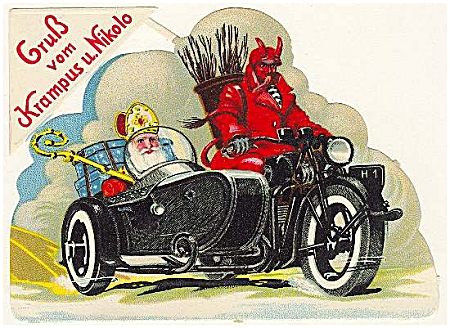 This is the Devil-like “Krampus.” He usually appears as a hairy, two-horned, human-like being, often with one human-like foot and one cloven hoof… and an amazingly long tongue that always hangs out. Instead of Santa himself giving lumps of coal to bad little children, he played “Good Cop/Bad Cop” with the Krampus. Some legends have it that Santa “summoned” the Krampus from Hell to do his annual job, which was to threaten … and even beat … small children with a bundle of sticks if they’d been naughty rather than nice for the year. 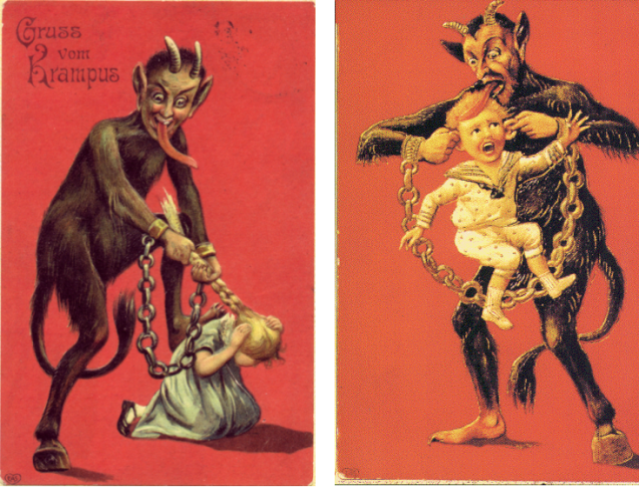 The American version of what “Santa” would do about “naughty children” has usually been limited to tucking a lump of coal instead of candy in their Christmas stocking. But that’s too mild for the Krampus. Krampus lore has it that, if a child’s reputation for naughtiness was bad enough, they might even be snatched by the Krampus, put into the basket on his back, and either taken to a nearby river and drowned, or perhaps even be taken back to Hell with him. (This whimsical little “tradition,” of course, from the culture that brought us the children-eating witch in Hansel and Gretel.) Note the “Satan” label on the bumper of this Krampus’ sled, and the “Zur Holle” traffic sign on the left … “To Hell.” 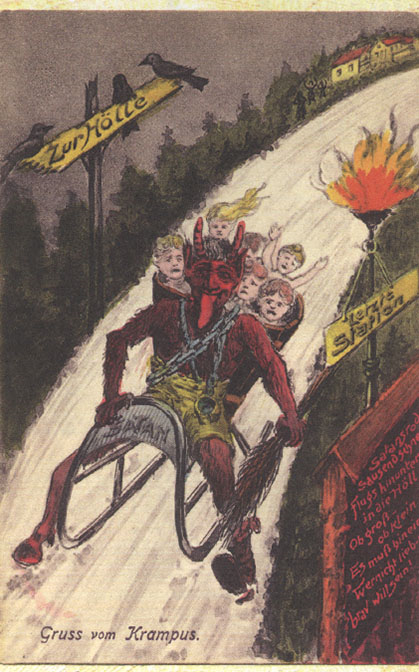 So every year, before pretty Christmas cards would begin arriving in your mailbox, in certain parts of Europe you could expect to get “Gruss vom Krampus”: Greetings from the Krampus cards. Not nearly so pretty. 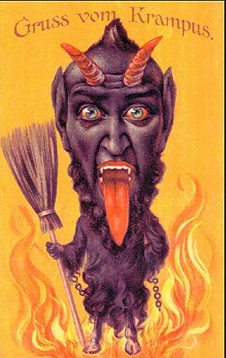 Not happy with leaving this as a “legend,” in the cultures where the Krampus concept has thrived, men—frequently  young, drunk, and rowdy—have long dressed up in outlandish costumes of hairy animal skins and chains, wielding their switches, and roamed the streets of villages and towns on December 5—Krampus Day—terrifying and beating on small children and even adults—especially attractive young women. 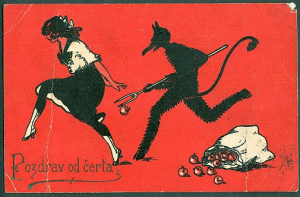 The heyday of the Krampus-ian revelry seems to have been the mid-to-late 1800s (most of the pics in this blog entry are from close to the turn of the last century), but the tradition has never died out in some areas of northern Europe.

Over 1200 “Krampus” gather in Schladming, Styria from all over Austria wearing goat-hair costumes and carved masks, carrying bundles of sticks used as switches and swinging cowbells to warn of their approach. They are typically intoxicated males in their teens and early twenties. They roam the streets of this typically quiet town and hit people with their switches. It is not considered wise for young women to go out on this night, as they are popular targets.

And it is making a “comeback” in many other places … and being picked up even in the USA and adopted as a new “holiday” tradition. (No doubt particularly by rowdy young men wanting to harass pretty young women.) And with modern costume-ry, they have taken it up a notch.

Happy Krampus Day everyone! It’s one of the most wonderful times of the year. “What’s Krampus Day?” you might ask. Well, it’s a lot like Christmas. Just replace peace and joy with fear and loathing, wholesome presents with brutal floggings and jolly Mr. Claus with a gruesome horned incubus named Krampus and you’ve got the general idea.

Here’s how one American visitor to a Tyrolean town described her experience at a KrampusFest.

The Krampus festival is a traditional Austrian celebration in which the men of the town dress up as horrible demons and chase small children through the streets, beating them with whips.

It started with a “parade”, although I hate to call it that because I like parades. They’re usually pretty fun, you know – floats, beauty queens in convertibles, high school marching bands. This, on the other hand, was terrifying. The demons entered the town, waving torches and rattling their chains (yeah, some of the scary demons were chained to a giant wagon which was being driven by another scary demon). They were all screaming, growling and making all kinds of other demonic noises as they marched past, whipping anyone (me) who happened to be standing too close. This was not a joke or a friendly tap, people. I still have a bruise from the demon’s whip, which is a sentence I hoped I’d never have to say.

When the demons reached the center of the town, they gathered in what was essentially a satanic ritual in which they were “set free” by San Nicolo. Yeah, Santa. Santa Claus unleashed hordes of demons on this town, giving them permission to run free and whip innocent young children and Americans. It was unbelievable. At one point, I watched a large hairy demon chase after a small girl, dive through the air, tackling the girl to the ground where he ripped off her hat and started rubbing her face in the snow. Unfortunately I didn’t get a photo of this, as I was too busy dealing with my own evil demon attack.

As scary as the Krampus revelry obviously is for small, gullible children—and as much as it encourages them to avoid naughtiness… at least close to Christmas (or St. Nicholas Day, December 6, the gift-giving day in some countries)—the bottom line is that they will eventually grow out of their fear. Yes, just as children eventually grow out of belief in the saintly, god-like Santa Claus (who “sees you when you’re sleeping and knows when you’re awake.”) So what is the ultimate result of a “tradition” about a devil-like character who ends up being just a cartoon? The little boys who were once so terrified by the Krampus … want to BE the Krampus themselves. And the fear of being naughty? Don’t be silly … the customs of society encourage them to aspire to as much ugly naughtiness as possible. It’s “fun,” don’t ya know!?

They’ve “tamed the Devil”—or turned him into a cartoonic Chewbacca-type character…with a chip on his shoulder. They think. And inserted him as a key player into the season that most people have thought is one of “peace on earth, good will to men.” AND … he’s been accepted there. Yep, it’s all in fun, don’t ya know?

What’s wrong with this picture?

1 Response to The Happy Face of Hell